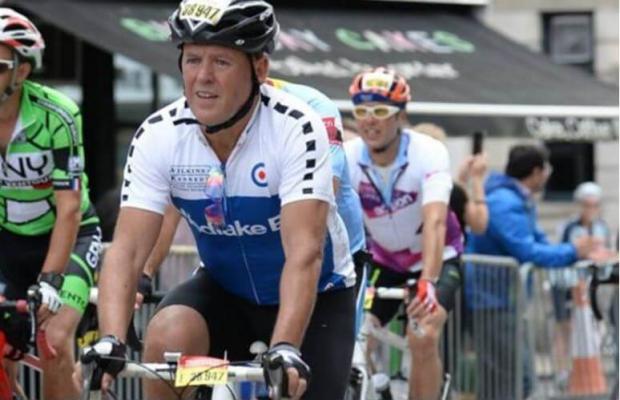 The course, made famous by the world’s best cyclists in the London 2012 Olympics, set off in Queen Elizabeth Olympic Park and followed a route through the Capital and then into the beautiful Surrey countryside, and through the Surrey Hills before a spectacular finish on The Mall in central London.

The task was no mean feat; the exhausting ride tested even the fittest; both physically and mentally, as they rode up sharp inclines and hills that felt like they lasted an eternity. Yet Mark didn’t let that beat him, finishing the course in a time of 7 hours and 26 minutes!

Mark completed this gruelling 100 mile bike ride to raise money for the Lynda Jackson MacMillan Centre, an amazing centre that works tirelessly to provide help and support for people affected by cancer. This incredible centre relies on charitable donations to fund 50% of its running costs.

Mark has raised over £1,000 for this immensely worthwhile cause. Yet he doesn’t want to stop there...no, he’s already smashed his original £500 target by double, but he wants to keep on going, raising even more for this incredible worthy cause.

1 in 2 people will develop cancer at some point in their lives, according to research carried out by Cancer Research UK. Cancer brutally targets us all... the young, the old, the healthy, the ill.

Not only do we need to find a cure for this terrible disease but we need to make the lives of those who are suffering that little bit more bearable; just like Mark’s chosen charity, Lynda Jackson Macmillan Centre, does.

The chances are you already know someone affected. If not, sadly you soon will.

Do you think he can double this current total? With your help he can! However little, however much; every penny counts and Mark will be hugely grateful.

So donate now on his Virgin Money Giving Page – and remember to Gift Aid, which significantly increases the money raised! Simply follow this link to give now! http://uk.virginmoneygiving.com/mark-byrne-qae-PRLS-2017-42514463

On behalf of Mark, a massive thank you for supporting him.